The innovative office premises of the new head office of aib are located at Fürstenstrasse 18, near the main railway station in Duisburg. Originally constructed as warehouses back in the Fifties, the company’s in-house planners brought the building up to the very latest of technical standards and created modern and future-proofed office workplaces. With the most minimal of interventions, bright, loft-like spaces have been created here, in which transparency and communication play an important role.

Aesthetically appealing dur-SOLO® raft ceilings from durlum blend harmoniously in the low-key interior colour scheme and support the division of the workspaces created on the ‘OpenSpace’ design principle. Interconnected by means of connecting clips, the white metal raft ceilings extend across the generously proportioned open-plan workplaces, rest areas and separate meeting rooms. Perforated with a contemporary hole pattern and backed with durlum acoustic mat, the large individual sails, measuring up to 3.3 meters reduce the noise level in the various work areas to such an extent that the reverberation time is so short as to create a pleasing acoustic climate. The dur-SOLO® raft ceilings appear to float weightlessly, suspended from threaded rods on the concrete ceiling, supporting the generous sensation of space. This weightless character is emphasized by the inconspicuous supporting structure of cross-beams integrated in the sails.

On hot summer days, the sails, designed as cooling ceiling units, reduce the ambient room temperatures to a pleasant level while still facilitating creative exchanges between team members. Here, the surface temperature of the metal raft ceiling is reduced to below the prevailing room temperature by cold water routed through the cooling system. This further extends the functional capabilities of the suspended dur-SOLO® raft ceilings which not only look elegant, but also deliver genuine acoustic and thermal benefits. 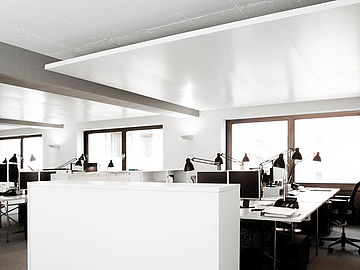 The dur-SOLO ACTIVE acoustic sail was developed for use underneath core-activated concrete ceilings. This system can be assembled and dismantled easily. 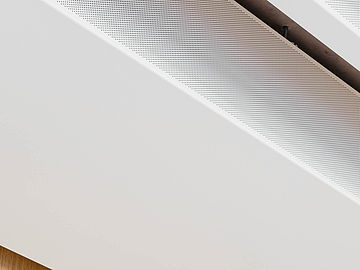 As well as lighting and air-conditioning, acoustics have an important role to play in the layout of rooms.