Learning and eating in an energy-efficient environment - that's what you can do in the new building of the Heinrich-Mann Grammar school in Cologne, Germany. The two-storey building is an addition to the existing school built in the 1970s, adding more classrooms, rooms for counseling and a modern cafeteria. Built in the "Cologne standard", the energy footprints of such a building and a passive house are very similar. The advanced design is backed by durlum ceiling and light systems so that the cafeteria is bathed with light.

The open ceiling of the 400m² cafeteria has many colors. Thanks to large glass fronts, the wide hall is also very bright and gets a playful, childlike charm with the POLYLAM® vertical baffle system powdered in many blue, green and yellow tones. The offset arrangement of the colorful verticle baffles contrasts perfectly with the black underground. The mineral wool backing highly absorbs noises, which upgrades the acoustics in the cafeteria considerably.

Bright PUNTEO®-S LED spotlights are integrated in the POLYLAM® vertical baffle system for pleasant light. In spite of their relatively small size, the PUNTEO® built-in modules brightly illuminate the cafeteria when the weather is bad or when it is getting dark. With an efficiency of 85%, the highly efficient spotlights illuminate the 5-meter-high room without glare. Both pupils and teachers like to spend their breaks in such an energetically efficient, but yet inviting and child-friendly environment 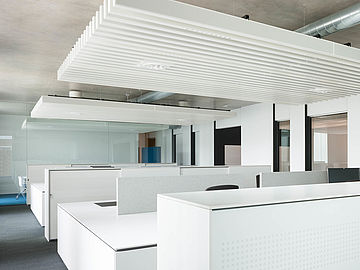 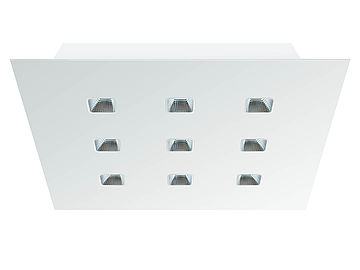