Glittering sequins in a listed building – an unusual touch of glamour afforded by the redesigned rooms of the Synchron Stage in Vienna. This hall, built in 1941, is home to two recording studios in which music is produced for international films. The durlum ceiling elements used by architects Schneider and Schumacher in the foyer and corridors contribute to the timeless, high-calibre design of the interior spaces.

The foyer, like the recording studios, is one of the most important rooms in the Synchron Stage. The hall itself, extensive and with a very open feel, is used for intermissions and rehearsals, and its look and feel are further enhanced by 72 mirror elements. With a material thickness of just 3 mm, these mirrors, specially developed for this project, appear to float weightlessly below the black ceiling, from which they are suspended on ropes or rods. The round elements have a mirror finish that makes them resemble oversized sequins, and these create the illusion of the room being almost infinitely high. As well as their visual attraction, the mirror surfaces help the ceiling to absorb sound, which in turn improves the acoustics in the foyer.

In stark contrast to this, clean lines constitute the dominant feature of the corridors in the Synchron Stage. Special lengths of linear louvers fit seamlessly together at ceiling level and direct the movement of people, i.e. the point the way. This interplay of the traditional and the modern, of rounded shapes and straight lines, helps to make the Synchron stage in Vienna into such an extraordinary building.

The open metal ceiling with clearly defined edges is presented in a unique way. STAR defines architectural features in any architecture. 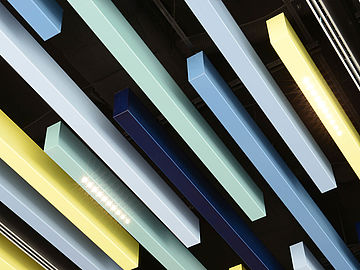 The surfaces of metal ceilings can be enhanced with powder-coating processes and made more robust.