Cultural exchange, transnational cooperation ventures and the social development of Europe. The ERSTE Foundation, based in Vienna, has been involved in these and other socio-political topics ever since 1819. Since 2003, the foundation broke away from the Austrian association of savings banks, the Sparkassenverband, and now operates independently. The ERSTE Foundation opened a library in December 2016 where the knowledge it acquired from more than a century of experience is archived in printed and electronic literary form, making it available to everyone.

The design open cell metal ceiling LIVA skillfully complements this media environment, spanning a ceiling surface area that measures more than 700 square meters. The ceiling extends over two levels and showcases the shelving units containing the various media to optimum effect. Small blades arranged at right angles to one another create a structural surface for the open ceiling. Reminiscent of the opened pages of a book, these blades are arranged in regular rows in the airy open-cell ceiling design. The lightweight design of this metal ceiling establishes a striking colour contrast with the yellow floor of the library. Of course, LIVA impresses through more than its remarkable appearance. It also provides technical advantages. Due to the large free crosssectional area of the LIVA system natural convection can reach the cooling elements in the ceiling void ensuring an optimum thermal performance. To obtain free access to the ceiling cavity in the event that repairs are needed, every single one of these metal blades can also be folded down and removed.

A special design of angled steel plate forms the border around this open-cell ceiling. Filigree while at the same time bold and visually striking, this edge finisher encloses the design open cell metal ceiling LIVA. 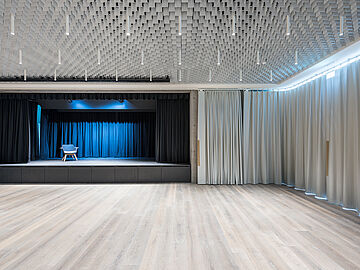 The LIVA open-cell ceiling is characterised by its homogeneous appearance. Each row of blades can be folded down and removed individually.