Directly beside the picturesque old town of Bern, a UNESCO World Heritage Site, is the second largest railway station in Switzerland, to which a new underground station is being added because the existing one has reached the limits of its capacity. As part of this project, a new station underpass is being constructed, also with a new main access point by the Bubenbergzentrum. The section of the centre affected by this new access point is getting replaced by a new building while building section BBZ 8 is being retained. In architectural terms, the new building and Building 8 will merge into a single unit.

Ahead of this project, various parts of the existing building will be renovated, including its projecting roof. For this renovation project, the architect envisioned an illuminated ceiling that appears endless, yet that also blends inconspicuously into its surroundings. The special ceiling that we developed specifically for this project, with angular perforation in a seemingly random sequence of irregular holes, enables this vision to become a reality. Our TANGENTA-Q24 LED light line backlights the metal ceiling and bathes the outside area in a pleasant and homogeneous light while our PUNTEO-N spots create individual highlights in the ceiling pattern.

The unique design of the projecting roof demonstrates that truly great architecture can arise when vision and execution blend to form a single unit. 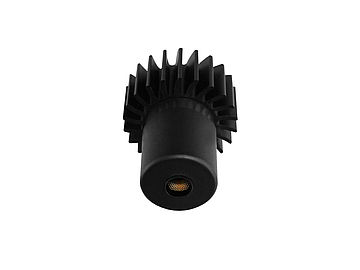