The Indian research station Bharati became operational in April 2012 after three months of construction work. The futuristic building is anchored firmly in the rocky ground of the Larsemann Hills, in the northeastern part of the Antarctic. Located in one of the coldest regions of the world, the station is cut off for many months from the outside world during the arctic winter. Therefore the narrow time window of the arctic summer and the complicated logistics were a special challenge for all companies involved.

The design of the architect’s office based in Hamburg is focused on three simple principles: redundancy, sustainability and mobility. The result: 134 custom-made container are the core of the building and are protected by a robust metal façade. The modular design of the building allows a rapid construction and guarantees the complete dismantling. Each module of the research station was manufactured in Germany. Prior to shipment the station was built for testing purposes at the port of Duisburg.

durlum delivered two different metal ceiling systems for the custom-made container. The corridors were equipped with the ceiling system FF2025, that has a sound-absorbing acoustic fleece lining on the rear. In the sanitation of the station corrosion-resistant S1-RHOMBOS expanded metal ceilings with an dirt-, oil-, water- and fuel-repellent polyester felt were installed. 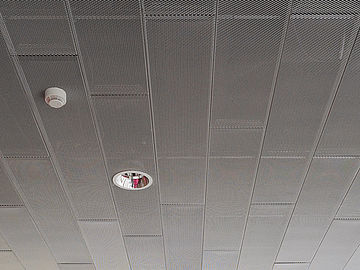 The S1 RHOMBOS clip-in system is a concealed sub-structure into which the panels can be mounted positively. 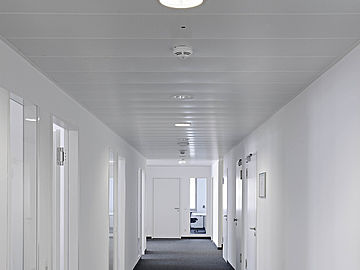