Eye-catching elegance: Rising to a height of 181 metres, Torre Caleido is the fifth highest skyscraper in Madrid and forms part of the business district in the centre of the Spanish capital. The fifth tower, aptly named Quinta Torre, completes this impressive ensemble of high-rise buildings.

Even from outside, the architecture of this building, consisting of a plinth base and tower, is visually fascinating, extending upwards to 36 storeys with a black glass facade. Inside, the prestigious IE University has established its head office while public facilities extending across the street-level part of the structure invite visitors into the Business Area.

This project, implemented by two companies of architects, Fenwick Iribarren and Serrano-Suñer Arquitectura, is based on what is referred to as Blue Architecture, an approach that aims to achieve optimum harmony between people and the environment. One aspect of this ultra-modern concept is the POLYLAM vertical baffle ceiling concept from durlum. The striking design feature of this open ceiling is its unmistakable sense of space. Powder-coated in black and white, the baffles blend elegantly with the rooms. Lining the non-visible face of this ceiling gives it great acoustic properties, further enhancing a general sense of well-being. 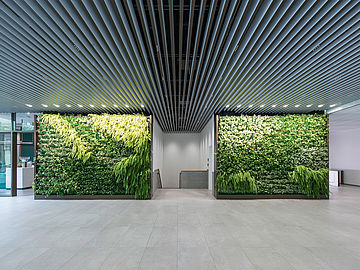