City, country - and a great deal more! The small town of Korntal-Münchingen located right beside Stuttgart offers tremendous variety in many respects, also thanks to its geographic position. The Municipal Hall can be used as a cultural and conference centre for a wide range of events, both small and large in scale. Its attractive architecture is visually very appealing. Made primarily of glass, wood and natural stone, this building was renovated as part of a fire protection project, and durlum introduced an aesthetic new combination of ceiling lights.

In particular, the great Schillersaal, a grand room named after one of Germany's greatest authors, is resplendent after this facelift. The impressive and formerly wooden tent-shaped room structure has been replaced by a special fireproof version of the RHOMBOS expanded metal ceiling. The design comprises many linear metal elements in various formats, that blend the ceiling seamlessly into the wall panelling. Technical installations such as fire alarms and wiring are now much easier to access for maintenance work thanks to the new open design of ceiling. With a free cross-section of 50%, the expanded metal ceiling imbues the tent-shaped roof structure with a slightly transparent character.

Lighting was very much a focus of this renovation project. The grid lighting has been replaced by OMEGA 63 LED lighting channels that span the ceiling like a spider's web. Dimmable, with some also acting as emergency lighting, these lighting channels are ideally suited to any situation. Not only that, but the luminaires also deliver a design benefit. The luminaire channel forms the support profile of the sub-frame of the RHOMBOS expanded metal ceiling. 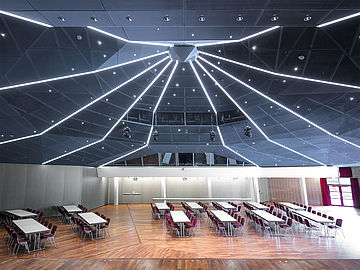 S-OMEGA RHOMBOS is a linear expanded metal ceiling system and it is supported by the integrated OMEGA lighting channels. 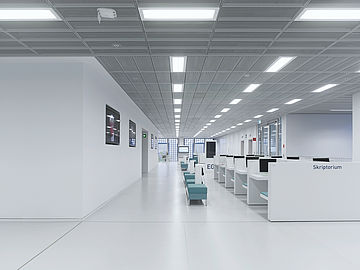 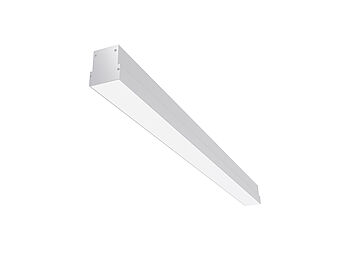